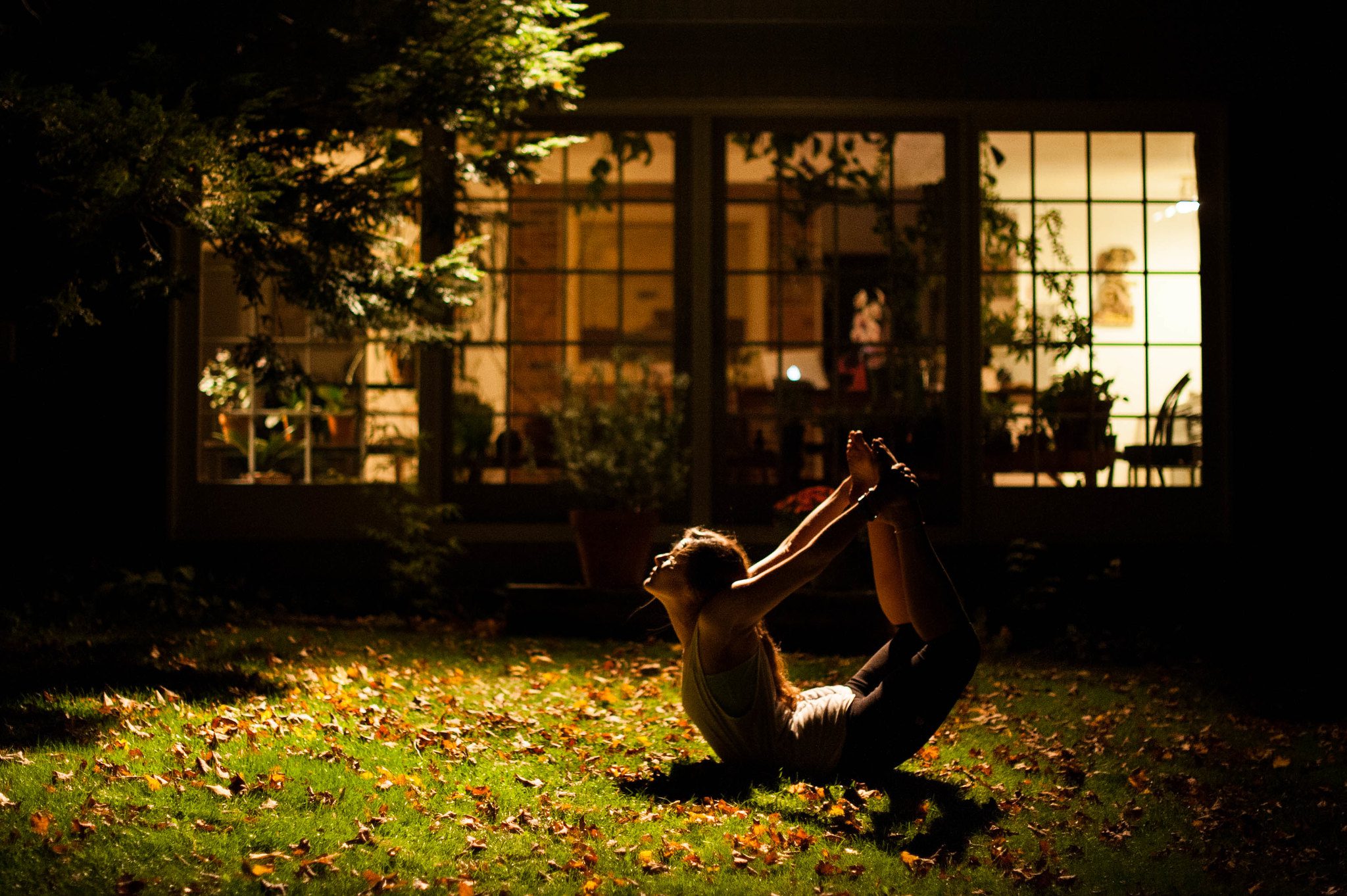 We’ve almost made it through another calendar year — and the energy of adventurous Sagittarius is upon us to remind us of any last important tasks or desires we’re hoping to fulfill as we come upon the winter solstice. Running from November 21 or 22 of every year right until winter officially begins on December 21 or 22, Sagittarius season asks us to begin to take stock of where we’ve been, so we may prepare to take aim at where we’re going. It’s a season that encompasses the beginning of the holidays — a frenetic time of year when we may feel pulled in multiple directions. Sagittarius’s energy reminds us of the independence of our personal needs, even as we tend to those around us.

The fearless enthusiasm of fire sign Sagittarius inspires us to explore what is possible. Ruled by Jupiter, the planet of good fortune and luck, Sagittarius is a visionary, reminding us that stagnancy only keeps us small. As we begin to review our year, we may find ourselves pulled toward risks that once seemed out of reach. Symboled by the courageous Archer, Sagittarius encourages us to take a chance; a reminder that risk yields reward. The courage sought during the Sagittarius season is often found in retaining a sense of optimism, as we know the dark days of winter are upon us. As we stand at the precipice of possibility and plunge forth into the unknown, the excitement of taking a gamble in the game of life broadens our perspectives, regardless of outcome.

Yoga is a practice of bravery, because it requires us to stand (or sit, or lay) fully naked with ourselves, in our own authenticity and wisdom. This is what the lessons and themes of Sagittarius season are all about — the cultivation of personal authenticity so that we may remain brave and courageous in our outward pursuits. It’s fitting that Sagittarius season begins with a rumination on gratitude in the U.S. (a note here to acknowledge the problematic history of Thanksgiving as it pertains to cultural genocide). In order to step into our own bravery and authenticity, we often need to experience or nurture a sense of gratitude for where we’ve been. As the Archer asks us to take aim and step into that bold energy of this fire sign, it is imperative to bring with it an attitude of gratitude for all that has brought us to the culminating moment of now.

Wisdom is another important theme of the season, as we close the final cycle of autumn’s transition and prepare for the long inward journey of winter. When we have taken stock of where we’ve been, and in authenticity and bravery set ourselves up to take aim at where we’d like to be, we not only need to rely on our inner wisdom, but gain it. The transition of fall has given way to the ruminations and introspection of the solstice. Sagittarius is the bridge that prepares us for the final journey of the astrological year. 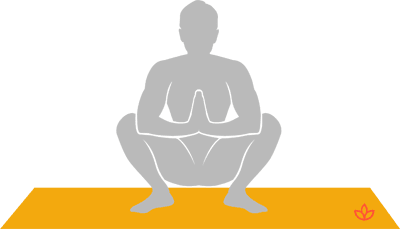 Sagittarius rules the hips, and this squatting posture is known for its capacity to strengthen the pelvic floor. As the hip flexors and groins receive a deep stretch, the shape also strengthens the ankles and feet. The abdominal wall engages slightly to lengthen the back-body and draw the spine toward neutral. Squat Pose can be made more accessible by placing a block beneath the seat for support. This helps to build stability in the ankle joints and root into the outer edges of the feet.

Draw your palms together at your heart as a gesture of gratitude. Press into the lowest part of your inner thighs to maintain the opening as sensation percolates in your hips. The inner edges of your feet can be brought together to send the knees out wide as your spine flexes forward. This pose engages and opens the root (Muladhara) chakra, and stimulates the sacral (Svadhisthana) chakra as the transverse abdominal muscles are activated. 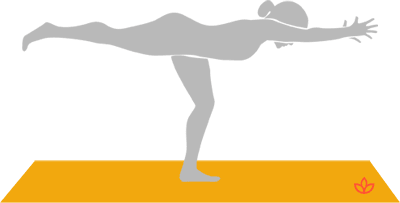 Hindu mythology describes the warrior Virabhadra, an incarnation of Shiva, in three aspects, providing fodder for all three Warrior poses. Daksha, a powerful priest, held a yagna (a ritual sacrifice) and did not invite his daughter Sati or her husband, Shiva. Angry with her father, Sati threw herself into a fire in retaliation. Shiva was so devastated that he ripped a tuft of hair from his head, from which sprang the thousand-headed warrior Virabhadra, who decapitated Daksha with his mighty sword. The shape of Warrior III comes from the moment in the story that Virabhadra offers Daksha’s head forward.

Warrior III stabilizes your hips, strengthens the back body, and engages the abdominals. The shape tests and improves balance, and requires total-body coordination. Jupiter mudra can be incorporated into the pose by interlocking the palms overhead and extending the index fingers toward one’s expansiveness; to the vast possibilities of the future.

The throat (Vishuddha) chakra is activated by both the posture and the mudra as the cervical spine lengthens. The crown (Sahasara) chakra awakens to the higher collective consciousness, and the third eye (Ajna) chakra to greater insight and clarity. The sacral (Svadhisthana) and solar plexus (Manipura) chakras are also stimulated as the abdominal wall engages to sustain the shape.

The 700-verse conversation in the Bhagavad Gita between Krishna and Arjuna occurs when Arjuna puts down his dhanu, his weapon-bow, and refuses to fight. Krishna works to convince Arjuna that the battle is in fact his dharma and part of the greater plan. The bow shape of this posture is an archetype for cultivating courage in the face of transition, to surrender the ego and go forth with fearlessness and grace.

Bow Pose is a tremendous backbend. Though the shape asks the hip flexors to move beyond a functional range of motion for many practitioners, you can make Bow Pose more accessible by using a strap. As your back body is mobilized and abdominal wall stretches, Bow Pose broadens your chest and pectoral muscles across the front of your body to open your heart. Length is generated from tailbone to crown, particularly along the cervical spine to open your throat.

This posture is energetically significant, as the heart (Anahata) chakra is the point of transition from the lower (material) chakras, and the upper (spiritual) energetic centers. Bow Pose also activates the throat (Vishuddha) chakra, stimulating courage to voice our authentic truth.

Not a traditional yoga asana but commonly invoked in a modern class, circling the hips is an exploration of the pelvis. Begin in a tabletop position, with knees just behind hips, and palms placed just wide of elbows, and anchor the knees, shins, tops of feet, and palms into the earth. Rock back and forth to stimulate energy flow upward from the base of your spine. Pressing down into your hands and pushing away from the floor will open create more space between the shoulderblades at the back of your heart.

Moving around in circular motions helps release and strengthen your lower back, as the outer hips receive a gentle stretch and the pelvic floor is engaged. Honing the deep core muscles stretches the intercostal muscles between the ribs while toning the arms and shoulders.

Hip Circles are an energetic “stirring of the pot,” awakening creativity by sending the flow of prana directly to our sexual center, the sacral (Svadhisthana) chakra. This is the seat of our creative and passionate forces where who we truly are, and what we’re cultivating, resides. In this position on all fours, it is encouraged to explore any kind of intuitive, organic movement the body may be craving—invoking the practice of physical svadhyaya. Hip Circles are a great way to begin an authentic conversation with your body. 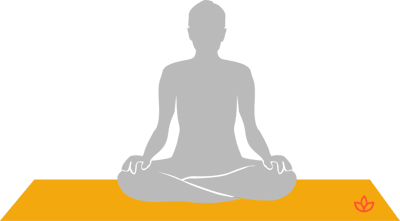 When the Prince Siddhartha sat beneath the Bodhi tree for seven weeks to understand the meaning of existence, he vowed not to leave his seat until he could find a way to end the suffering of the world around him—even if that meant his own death. During those 49 days, he realized that the cause of human suffering was greed, selfishness, and foolishness, and that if we could rid ourselves of these senseless emotions we could find true happiness and contentment. With this revelation, he attained enlightenment and reemerged as the Buddha.

This simple seated posture helps relax and open the hips and groins, the region of the body ruled by Sagittarius, to lengthen the outer thigh muscles, or abductors, and stretch the ligaments in the knees and ankles. By holding the spine upright, the back is gently strengthened. If the hips and knees are tight, sit on top of a folded blanket or a yoga block for additional support. Easy Seat works also wonders for stress and anxiety reduction.

Lisette is a writer, yoga teacher, and content director. She’s a member of the founding leadership team for Yoga Unify, a new yoga non-profit, the Director of Marketing at Mammoth Yoga Festival, and the co-author of The Yoga Almanac. Lisette completed her 200-hour training in Brooklyn and her Reiki attunement in India, and furthered her studies with Leslie Kaminoff of the Breathing Project, Tiffany Cruikshank, and Andrew Holecek. She’s also a Grief Coach and Death Doula, whose work is focused on integrating the tools of mindfulness and asana for grief healing and end-of-life anxiety. A filmmaker in a past life, Lisette has made videos with community leaders such as Dharma Mittra, Eddie Stern, and Eoin Finn. She lives with her husband and animals in the Hudson Valley, NY..

Andrea Rice is a writer and editor covering health and wellness. Her work has appeared in Yoga Journal, The Wanderlust Journal, mindbodygreen, Astrostyle, SONIMA, and New York Yoga+Life. She has also worked as a journalist for The New York Times and INDY Week. As a yoga teacher with a decade of experience, Andrea completed her 200-hour training in New York, NY; and furthered her training with Elena Brower and Alexandria Crow. She has also studied astrology extensively with The AstroTwins, Ophira and Tali Edut. Andrea has offered yoga, meditation, journaling, and creativity workshops in Brooklyn and Manhattan in New York, NY; and has been a presenter at Wanderlust. She lives in Raleigh, NC, with her husband and their cat, where she teaches yoga at Blue Lotus and the North Carolina Museum of Art.